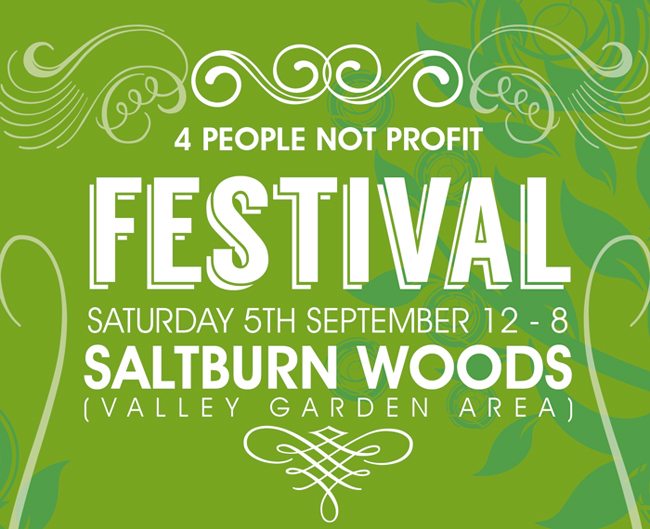 The Return of the 4 People Not Profit Festival

After a 6 year hiatus the 4 People Not Profit festival returns to Saltburn for another free family all day event. The event will be held on the 5th September from 12pm – 8pm in Saltburn woods valley garden area. With the main stage and dance stage on the commonly called donkey field and an acoustic stage held at the woodland centre.

The event is to celebrate the vast array of activist and community groups in the Teesside area which we have brought together to form the 4 People Not Profit Community Network. With the aim being to promote the great work these groups do and encourage more people to get involved in community activism.

The main stage hosted by 4 People Not Profit will include a selection of the best bands we have had to play at our gigs over the years including Village Green, Lost State of Dance and General Sherman. The dance stage will be hosted by Teesside’s Kings of Leftfield parties, the Old Saw Mill Garden Party crew with a very special stage with a selection of breaks, drum n bass, electro swing and house dj’s playing throughout the day. And running the acoustic stage at the Woodland Centre will be the fantastic Saltburn Folk Club with a range of superb acoustic acts including Stormcrow, Doc Noir, Sara Dennis & Steve Dagleish.

As well as all the great music their will be various activities, a children’s area and food stalls. And if that was not enough the Marine pub will be hosting an after party from 8pm – 12am with more DJ’s to keep you dancing into the night

Being human is universal and therefore providing rights based on universality without individual governments’ criteria of what it is to be human is essential for concepts such as democracy and freedom to be realised.

The Human Rights Act (1998) promotes and actively supports the view of the universality of the human it is therefore essential to remain in British law. The current government is committed to abolishing the Human Rights Act. Thereby eradicating humanitarian progress, reducing the power of the people in favour of extending the power of government and placing people at greater risk of discrimination and abuse by the powerful.

Champions of Human Rights, such as Amnesty International aim to promote respect for the human – human being a universal term regardless of age, sex, ethnicity and other possible social barriers. The human, should not be subject to prerequisites, for example, human rights only for the subjective ‘good’. As human beings, it can sometimes be difficult to provide an equal measure of empathy, love and respect to all due to personal moral guidelines of ‘right’ and ‘wrong’. This is why ‘human’ needs to be accepted as a universal concept, to protect against various societies social constructs of prejudices and discrimination.

All recognised governmental bodies have the ability to determine the civil rights of their citizens. This allows for the diversity of religious and moral guidelines to be respected and determined by the powers within that particular society, hopefully with the needs of that particular society reflected. This freedom is important and highlights the key difference between civil and human rights.

The Act not only serves as a mechanism to seek redress, it plays an essential preventative role. For example, the Act is considered by public bodies within institutions such as Health and Education when making policy decisions about the service provided. The Human Rights Act offers vast protection and redress to all humans, from the young to the elderly. For example, by supporting children who face exploitation, people who are abused through domestic violence and the rights of dementia patients.

The Human Rights Act is also the most valuable piece of legislation that aims to protect the people from abuses of state power, including central government and all public bodies. It is the first time since the Magna Carta that the British law recognised the need for the people to be protected from the tyranny of the minority. The Act, therefore increased the accountability of the government and public bodies to the people, effective from 2000. In contrast to the United States of America which created their constitution on the basis of the agreement to create a codified Bill of Rights, which was enshrined into law in 1791.

There are numerous petitions calling for the government to ‘Keep the Act’, if you would like to find out more and participate in the Amnesty International campaign please visit the website below:

Speaking out against benefit sanctions

In March I was outside Middlesbrough Job Centre, speaking out about the benefit sanctions regime. It was part of a national day of campaigning called #no2sanctions. I thought I’d share with you why I was speaking out.

I used to run an organisation that worked with some of our communities most vulnerable people. We supported people to find a way out of poverty, sexual exploitation or addiction. I have always tried to be a voice for our service users. I first spoke out about benefits reform quite a few years ago. I was concerned because the new policy being developed looked like it was going to create a system that punishes those who can’t work, making life much harder for them. I questioned how this would help people into employment.

As the reforms developed, we saw correlating increases in poverty, depression, destitution and prostitution. We were told of families going without food, elderly people having to choose between heating or eating, a woman using a neighbours bath to wash as she had no gas for hot water, people turning to begging and in some cases, prostitution to just get by. We have always had poverty in Teesside but this was something else.

One of the specific problems was the amount of people who were being sanctioned. A sanction is where the job centre stops your benefits if you have failed to meet their requirements of “seeking employment”. People were reporting being sanctioned for really simple things like being ten minutes late, being ill and unable to attend their job seeker appointment and not getting through to anyone on the phone. People were giving up and dropping out of the system. This is what would bring them to our door. With nowhere else to turn, they began turning to charities and churches to find food, warmth and support.

I couldn’t believe this was the world we were living in. I grew angry at what I was seeing. Shows like ‘Benefits street’ and ‘Benefits Britain’ didn’t help. They added to the public feeling that there was somehow a “deserving poor” Let’s just say this up front. No-one deserves to be poor, and they definitely don’t deserve to go without food, heating or electricity ; particularly when they live in one of the world’s wealthiest nations. It is just not right. People are now catching on to how cruel our system has become and have begun speaking out. Churches, charities, political parties and trade unions have all being making a noise about what is happening in our communities and with our welfare system. Citizens advice produced the ‘Punishing the poor’ report which highlighted how people being sanctioned were driven to suicide attempts, scavenging out of skips and begging. The Church produced a similar report calling on decision makers to urgently review the current sanctions system, stating one million benefit claimants had been sanctioned in 2014.

Many of us gathered to say enough is enough. We were saying “No to Sanctions” whilst calling on the government to urgently review it’s welfare processes. We want people supported into employment, what we don’t want is them being punished when they can’t work. Follow the debate using #no2sanctions today!/

How do Jonny here, I’m the one who codes and sends this mailer out and I’d like to ask you all a question if I may…

As it is I can’t really make the meetings so can’t bring any points up, however as I’m the one who actually preps this I thought this would probably be an ideal way to do this. So what I have is a bit of info and a couple of requests.

Firstly, this list. I send theses out via mailchimp (logo at the bottom) as it’s a free and reliable way to do so, stops any unfortunate incidents like we had with cc’d over bcc’d emails and spammy messages from hacked accounts, no names. To make sure our list is ok in an email marketing sense we have to have a good ratio of clicks throughs, opens and minimal bounces. Now the minimal bounces is easy as this isn’t a scraped list (everyone has at some point signed up) but what we want is a better list ranking in regards to clicks and opens etc. Now the easiest way for clicks would be to give you a sentence of each article with a read more link, this doesn’t sit right with me as the whole reason for the mailer in my eyes is to give the info direct to you so you can see it straight away on any device. You may disagree and not mind going to the site for the full story, so I’ve set up a poll to find out your thoughts.

Preferred Email Style: Click Through or Read In Mail

I would also like to suggest that anyone writing an article for this newsletter also include a link to either the cause they are writing for, their own personal blog, wherever they like really and again that we take the time to go through and look. I know that there is a lot going on and I’m guessing we’re all in the same boat with many emails from the likes of change.org, sumofus.org etc but I feel that we should use each others platforms more and really push the local issues (says the geordie in the teesside mailer). If that means you’d like to write an article direct for this site then please let Justin (or myself) know. I think we should be aiming for at least one post a week.

Edit: just read that there’s a August 20th deadline for the next issue!

Just before I go one last quick question that may have already come up in the meetings that I may be simply unaware of. A while back we asked for volunteers for a photographer for the nights we (4 People Not Profit) put on. Muted response was got. Thing is we all volunteer, bands get petrol money, a few beers etc, it’s the way it works. I know we’ve had a few nights done by different people but in the end it’s normally Justin’s shakey cam hand that does the business. Anybody know anyone who’d do them? Maybe a couple for the up coming festival, I’d really like to see some great shots as I reckon it’ll be a great day with a terrific turnout.

Well that’s enough from me I think, cheers.